Methane (CH4) is a hydrocarbon that is a primary component of natural gas. The government is currently considering a policy to incentivise reductions of methane emissions in New Zealand agriculture.

The Intergovernmental Panel on Climate Change (IPCC) estimate that methane is responsible for around 30% of the rise in global temperatures since the industrial revolution.

Methane persists in the atmosphere for a far shorter time period than CO2 (an estimated 12 years compared to carbon’s centuries-long lifespan). It’s also less abundant.  However, methane is much more effective at trapping heat. This means that it has a global warming potential (GWP) that is 80 times greater than CO2 over a 20-year period.

2.    There is a global pledge to reduce methane emissions

The pledge made at COP26 in Glasgow in 2021 was to reduce global methane emissions to help achieve the Paris Agreement goal of limiting warming to 1.5 degrees Celsius. Delivering on the Global Methane Pledge has the potential to reduce warming by at least 0.2 degrees C by 2050.  New Zealand and other countries joining the pledge commit to a collective global target to reduce global methane emissions by at least 30% from 2020 levels by 2030.

The World Meteorological Organization in October 2022 reported the biggest year-on-year jump in methane concentrations in 2021 since systematic measurements began nearly 40 years ago.  Explanations for the rise in methane emissions range from expanding exploration of oil and natural gas, rising emissions from agriculture and landfill, and rising natural emissions as tropical wetlands warm and Arctic tundra melts. But an additional explanation could be a slowdown of the normal chemical reaction that removes methane from the atmosphere. ( A clear explanation of this process is given by the following Oxford University brief https://www.eci.ox.ac.uk/research/energy/downloads/methaneuk/chapter02.pdf; )

The Global Monitoring Division of the US National Oceanic and Atmospheric Administration (NOAA’s) Earth System Research Laboratory has measured methane since 1983 at a globally distributed network of air sampling sites The data shows that about 40% of methane emissions come from natural sources such as wetlands, while 60% come from anthropogenic sources such as agriculture, fossil fuel extraction and landfill sites.

4.    Methane from the global energy sector

The oil and gas sector accounts for about 40%of methane emissions worldwide according to IEA estimates.  Oil and gas industries are major producers of methane, emitting the gas during drilling, production, and other parts of their operations. Methane is also sometimes released intentionally from oil and gas facilities for safety reasons.

Enteric methane is a by-product of the natural digestive process occurring in wild and domesticated ruminant animals such as cattle, deer, sheep, and buffalos.

When microbes decompose and ferment food and fibres in the digestive tract of the ruminant, they produce energy and nutrients for the animal, and release methane from digestible energy loss. This digestive process known as enteric fermentation is the largest source of methane from livestock.  Up to 12% of a ruminant’s energy intake is usually lost as methane through the enteric fermentation process. The amount of enteric methane expelled by the animal depends on the quantity and quality of feeds, the health state and reproductive status of the animal, and environmental factors.

Due to different regional and national conditions, farming practices and approaches to manage supply chains, the intensity of enteric methane emissions and their mitigation potential varies significantly across regions and livestock systems.

Some studies have shown that grass-fed cattle produce 20% more methane in their lifetime than grain-fed cattle. This is due to two different factors:

In 2020 methane contributed about 44% of New Zealand’s greenhouse gas emissions.

MFE and Statistics NZ report that in 2020

The NZ Government has agreed with the He Waka Eke Noa Partnership and the Climate Change Commission that a farm-level levy pricing system is a good approach to incentivize farmers and growers to reduce agricultural emissions, with some modifications. This utilizes a split-gas approach (pricing short-lived and long-lived gases differently), but offers limited sequestration to on-farm vegetation, and allows for Government Ministers to set the levy price for biogenic methane, with advice received from the Commission, but with no input from a system oversight body. Incentive payments would be given to farmers for a range of mitigation technologies and practices that reduce emissions. In accordance with the Climate Change Response (Zero Carbon) Amendment Act 2019, the pricing of emissions would occur from 1 January 2025.

The He Waka Eke Noa Partnership recommends a split-gas price system so that a levy paid for biogenic methane and carbon dioxide are independent of each other. The levy is proposed to be paid at the farm-level with the price of the levy set by the minsters of agriculture and climate change, based on advice from a system oversight body, consisting of representatives of the affected parties. At the farm-level, farmers could calculate their on-farm emissions and receive credit for emissions mitigation practices undertaken. They also proposed sequestration credits for on-farm vegetation beyond the eligibility criteria of the NZ Emissions Trading Scheme.

The Commission has advised the Government that a streamlined version of the partnership’s proposal was possible by 2025. Key changes they suggested were to leave all sequestration to what is currently occurring under the ETS and place synthetic fertilisers that create long-lived gases into the ETS immediately.

A long-lived gases levy price would be set annually and linked to the price of NZUs under the ETS, but with a 95% free allocation in 2025, decreasing by 1% each subsequent year (although the allocation is subject to review). The price of biogenic methane emissions is to be set by Ministers periodically (either annually or every 3 years), based on the progress against the emissions targets under the Zero Carbon Act and on advice received from the Commission. The total methane levy paid will be the estimated amount of emissions calculated on-farm (using a centralised emissions calculator) multiplied by the levy rate.

The centralised calculator works by receiving the inputs in the table below which may be required to be proven with the corresponding evidence:

An important aspect to note in the above table, is that meat production data is not included in the calculator due to the fact that final carcass weights at the processor do not represent the time the animal was on farm actually creating emissions, nor the fact that only a percentage of stock is sent to the meat processor (e.g. breeding stock remains on farm). Therefore, industry averages at either a national or regional level based on animal type and class will be used when calculating livestock emissions. The Government reports that it intends to move beyond the simple reporting system above by 2027, to use more detailed data that recognises mitigation action and provides more accurate emissions estimates.

Farmers would be obliged to pay the levy if they have greater than 550 stock units, or 50 dairy cattle, or apply over 40 tonnes of nitrogen fertiliser.

The Government proposes contractual payments funded from levy money, will be paid to farmers who go through an application process for the management of indigenous vegetation and riparian plantings. There would be an ‘additionality’ threshold, with areas planted needing to be fenced off and pest free, and riparian plantings would need to have been established post the 2008 baseline. In the long term, the Government considers that all sequestration payments will occur under the ETS, however the eligibility rules requiring further consultation.

The Government proposes incentive payments of $50 per tonne of emissions reduced (in carbon dioxide equivalent). Examples of mitigation technologies that could be incentivised include:

Government modelling of the farm-level levy was undertaken and used the Partnership’s recommended price of 11 cents per kg of biogenic methane, as well as 8 cents and 14 cents as low and high prices respectively. At the medium pricing, one model predicts a 13% reduction in biogenic methane and a 5% reduction in nitrous oxide by 2030. Unfortunately for farmers this will come at a cost, with modelling showing the following decreases in net revenue by 2030 for the corresponding sectors:

In addition, the changes in the supply of agricultural production by 2030 for the following sectors are modelled as follows:

It has been estimated that the sheep, beef and venison sector will bear the brunt of the pricing policy due to emitting a higher amount of biogenic methane relative to net revenue.  This may lead to further land use change, most likely from sheep farms into forestry, although modelling predicts some sheep farms will convert solely to beef because of mitigation technology

The Government consultation document also acknowledges an alternative pricing option; Namely a tradeable methane quota system, similar to that of the ETS. This system would manage the volume of methane emissions in New Zealand and then allow the market (via supply and demand) to determine the price of Methane Units. Farmers would need to acquire these units to offset/pay for their methane emissions on farm. This system would be more effective and provide certainty that Aotearoa meets emissions targets.  However, the Government currently says that the system would be too complex to implement by 2025. Source: Anderson Lloyd briefing

IPCC reports on methane, such as https://www.ipcc.ch/site/assets/uploads/2018/02/WG1AR5_Chapter08_FINAL.pdf; 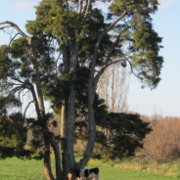 You need to be a member of Nelson Tasman Climate Forum to add comments!

When you share a resource here, please make your write-up interesting and relevant to audiences beyond our NTCF membership. This is important because the resources posted here appear in a feed on the public front page of our website.

Please choose a category (NTCF-Core, NTCF-General or External) and use tags when you add a new resource. Choose the EXTERNAL category for any resource that was not created by members of the Forum.