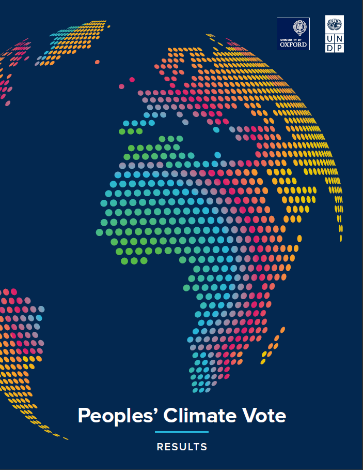 With 1.2 million respondents, the Peoples’ Climate Vote is the largest survey of public opinion on climate change ever conducted. Using a new and unconventional approach to polling, results span 50 countries1 covering 56% of the world’s population2. Poll questions were distributed through advertisements in mobile game apps in 17 languages, which resulted in a huge, unique, and random sample of people of all genders, ages, and educational backgrounds.
The Peoples’ Climate Vote is a pillar of the Mission 1.5 campaign launched in 2020 by the United Nations Development Programme (UNDP) to educate people about climate change solutions
and ask them about the actions that they think governments should take. The aim of the Peoples’ Climate Vote was to connect the public to policymakers – and to provide the latter with reliable information on whether people considered climate change an emergency, and how they would like their countries to respond.

Even though the survey was conducted during the COVID-19 crisis, there was still widespread recognition of climate change as a global emergency in every country surveyed. Over all 50 countries, 64% of people said that climate change was an emergency – presenting a clear and convincing call for decision-makers to step up on ambition.

Respondents were asked which policies – out of a total of 18 that covered energy, economy, transportation, food and farms, nature, and protecting people from climate impacts – that governments should enact to address the climate emergency.
Four climate policies emerged as the most popular globally:

The Peoples’ Climate Vote results were analyzed according to socio-demographic information provided by respondents, including gender, age, and level of education. Analysis of these indicate that:

You need to be a participant of Nelson Tasman Climate Forum to add comments!

Please choose a category and use tags when you add a new resource. Categories without NTCF in their names are for external materials.